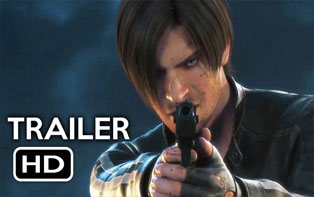 Resident Evil: Vendetta released this year in May and is set in the same universe as the rest of the Resident Evil franchise. It is a 3D computer animated action- adventure -horror film. This is the third CG animated movie following Resident Evil: Degeneration. The movie is produced by Marza Animation Planet and is directed by Takanori Tsujimoto.
Voice actor Matthew Mercer returns as Leon S. Kennedy. Other cast members include Kevin Dorman and Erin Cahill who play Chris Redfield and Rebecca Chambers.

In the movie, Chris teams up with Leon and Rebecca to stand up against the vengeful Glenn Arias, who has created an even deadlier strain of zombies. Chris Redfield is the only person holding the key to put an end to the deadly virus strain.
The film features an impressive score by Kenji Kawai. The screenplay, by Makoto Fukami’s includes inventive ideas, such as zombies programmed to attack only specified targets, and a broken hearted villain who travels everywhere with the arm of his fiancée.
Glenn Arias’ vendetta is actually very defining and he is made out to be the perfect villain, the reason for his actions leave the viewers baffled, surprised and wanting more. The movie also has several jump scares and tightly choreographed action scenes. Action director Kensuke Sonomura brought together remarkable live action fighting/shooting arrangements to the screen, ensuring people are always on the edge of their seats.