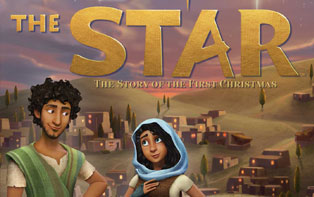 The Star is an upcoming Christian 3D animated comedy scheduled to release in November this year. The film is directed by Timothy Reckart and is based on the Nativity of Jesus. The movie stars the voices of Steven Yuen, Kelly Clarkson, Gina Rodriguez, Oprah Winfrey and Tracy Morgan to name a few.

The movie revolves around Bo, a donkey (Steven Yuen) who years to step out of his monotonous life. When Bo finally musters up the courage to leave his life behind, he makes some friends along the way and ends up witnessing a Christmas Miracle.

The Star is the story of the Nativity from the perspective of the animals who witnessed the birth of Christ Jesus. The film is a lighthearted adventure and aims to tell the time tested story from the Bible in a refreshing manner.

Mariah Carey has provided music for the film and the animation was taken over by Cinesite productions.

Executive producer, DeVon Franklin hopes the movie will provide a sense of purpose and meaning to the viewers. The film boasts some of the best voice actors and music score. The movie will be a completely new take on religious features.