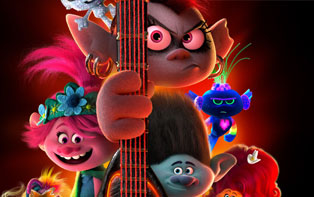 The voice cast includes Anna Kendrick an “Queen Poppy”, Justin Timberlake as “Branch”, James Corden as “Biggie”, Rachel Bloom as “Queen Barb”, their voice is easily recognizable. Many other voice casts were there who too did great job.
The Story begins where Poppy who is still adjusting her new role as queen receive an invitation from Queen Barb who wants to reunite all trolls. Despite of being warned by her father and Branch she replies to queen Barb via Debbie (the pet of) unaware of Barb’s intention that she wants to destroy all other music by stealing each tribes string. After learning about barb’s intention via small flute named Pennywhistle and hence Poopy seeks to unite all the other trolls against Barb.
This movie has got creative storyline by blending all the elements of music and defining what is music and its genres. This also carries a great message about how the diversity in music. Above all it came up with an entertaining story just brain mapping the simple musical thing, creating an antagonist and delivering a strong message about love, hug, happiness, cheers. It was completely fun entertaining.