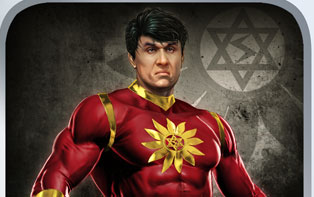 Who developed this game?

Virtualinfocom developed this game, which is one of the first of its kind in not just Kolkata, West Bengal, but in India, as it utilises 3D technology to bring its characters to life. It uses 3D technology to create the superhero main character, Shaktimaan, from the famous actor, Mukhesh Khanna, in the earliest stages of his career, to give the game a real-life feel, and allow gamers to relive the adventures of their favourite avatar through their screens, but this time, instead of sitting back and just watching the adventures,

they get to get their own hands dirty, and fight the criminals themselves. All the other characters are also made from 3D avatars of real life actors and movie stars, rendering a complete immersive experience for the gamers. Virtualinfocom, one of the biggest names in the Bengal gaming industry, has taken gaming in India a step further by meshing AI technology within this game. The moves of the villains and goons are directed by AI, which gauges Shaktimaan (the player’s) moves and acts accordingly. The game also changes according to which path the player takes, or which move the player makes. The bots fire at Shaktimaan from several directions, after predicting his moves, and determining the direction the player can move in, which increases the excitement of the game.

Description of the game

The city is under attack from evil goons hungry for power, as Shaktimaan, India’s first superhero arrives to save the world from being destroyed. He was created by the group of saints, Suryanshis, and gained various supernatural powers from the famous Kundalini Yoga, so as to save humanity from the grasp of evil. He conducted the ritual of death and gained his superpowers by completely immersing himself in the holy fire. The game is based on his hand-to-hand 3D fight with famous goons like Vajra, Sorpeto, Mrityu, Kelvish, Commando, and is based on virtual reality. The power of Shaktimaan increases as the levels progress, and each fight allows Shaktimaan to boost up and have access to more energy. The last level of the game moves at a breakneck speed, and high intensity, as this is the boss fight between Shaktimaan and Mrityu, the most powerful goon of all. The top notch AI technology of the game makes it one of the most challenging fights, since it forecasts the player’s moves, and blocks most of the predictable moves, thus constantly changes and improves the gameplay level.

A few of the characters

Vajra: He is the reincarnation of Dipanjan, the famous supermodel of Kolkata who died in a fight with the goons, and can wield thunder.

Sorpeto: He is the immortal Lord of Nagas, the ruler of snakes.

Commando: Shaktimaan has a massive fight with this dark goon.

Mrityu: He is the ultimate boss and arrives at the end of the game. To win the game, he has to be defeated.
N.B: All images are property of the creator of the movie along with the characters, we are just writing review of the movie.