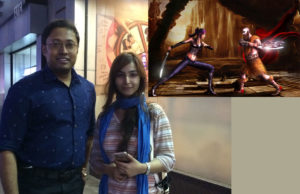 Srijla Guha
Katya was apparently orphaned as a child when she was trapped in a temple as debdashi during early 15th century. Jitantak a fighter pilot, found her in the inferno and rescued her.

She was almost brainwashed into serving the snakes clan the sorpeto, but was saved by Olga Umhrah and Avici solder. Katya is 400 years old, but is considered young in her realm and has the appearance of a young woman. Even though Katya is over 400 years old, she looks as if she is in her early twenties.