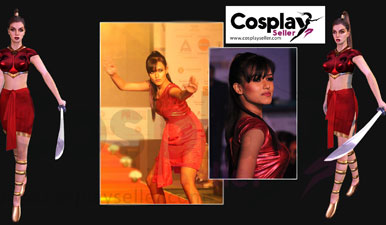 Cosplay generally stands for costume play. It is a performance art where participants, often called cosplayers, wear costumes to represent a specific character. Movies, books, T.V. shows, manga, comics, games, and anime are the primary source of all cosplay. It is the part of the popular culture in the Western world and in some parts of Asia.

Such is the popularity of cosplay that there are dedicated conventions and local and international competitions of cosplayers. Not only that, many social network pages and websites based on cosplay activities are there.

Let’s escape from reality!
The notion that cosplay serves as a gateway to escapism is due to the fact that an important factor is a popular culture which, often is related to entertainment purposes. We live in the world full of stress, family and personal problems. Hence, we all need to escape. Escape from reality helps in refocusing our attention on things pleasant and enjoyable. When we are stressed we want nothing more than escaping, and cosplay certainly offers that to us. Sometimes cosplayers use a phrase “a fun escape
from an average day” which explains why they love cosplaying.

Adding up the spice.

Cosplay gives spice and a new dimension to the fashion industry. People get bored seeing the same type of clothing every day.

Cosplay and cosplayers provide something new to them and become special in their eyes. The special and colorful clothes catch people’s eyes and add a creative touch to everyday clothing.

Consumption and fan identity = Welcome to the world of cosplay!

It is important to keep in mind that cosplay requires a degree of artistry and technical skills to design, create and replicate the character aesthetics produced within the so-called geek community. Earlier, all costumes were generated by the fans who wished to wear them. Now that cosplay (geek culture in particular) has attained mainstream popularity, prefabricated costumes can be purchased from online sites dedicated to fan culture. Many of the cosplayers even possess a strong background in fashion design or creative arts. Indeed, cosplay is providing opportunities for creative outlets. Cosplay not only provides opportunities for the fans to show off and develop their technical skills but also allows the creators to enjoy what they love to do.

It’s more than just dressing up.

The art of cosplay is more than just wearing a costume – it is about being the character. The amount of preparation that goes into costumes and how one can make them is a serious stuff. We all know that cosplay is quickly capturing people’s fascination. But is it that big thing which companies or industries can use as a tool to promote their brands or simply themselves? The answer is yes. Cosplay can give an industry (or a particular sector) a face that resonates everything that a common people wanted to possess. In that way, the character (or the superhero, in this case) and more importantly, the brand it’s representing, becomes very own to the people who can connect with them. So, cosplay is not only about dressing up in colorful and attracting costumes of your favorite pop character and attending conventions. It is also a powerful weapon in marketing strategy field that can popularize an industry’s brand.

Cosplay which, a few years back, was a part of the ‘geek culture’ has now become a part of the ‘popular culture’. Cosplaying has become mainstream now, so much that industries from various sectors are grabbing the opportunity to use it for promoting their brand. Companies are organizing events to promote cosplay characters that represent them among the audiences. The purpose of such events is to make the characters that a company has created as their face, get noticed. Cosplay characters are exotic and transcendental. With their colorful appearances, they are bound to get recognized. Whenever people will think of those characters, automatically they would also think of the associated industry. It’s a win-win situation for the industry. Moreover, this kind of events can turn out to be fruitful for the sponsors associated with the events. Just like the industries, sponsors too can get noticed and enough exposure. Truly, cosplay and the art involved in it is turning out to be the ‘golden egg laying duck’ for the industries who are willing to think out-of-the-box and many other sectors involved with this entire art form.

Share
This entry was posted in EVENTS and tagged cosplay. Bookmark the permalink.