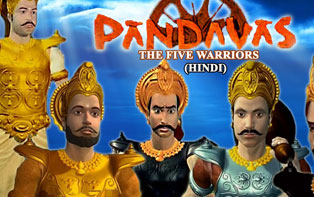 Usha Ganesh Raja directed ‘Pandavas: The Five Warriors’, the first computer animated 3D theatrical film to be produced by an Indian firm. This film was released in English at first as it mainly targeted the Western audiences. Later,the Hindi and Tamil version also came out.

This film is based on the stories of the classic Indian epic ‘The Mahabharata’. The story depicts the eternal fight between Pandavas and Kauravas that concluded with the war of Kurukshetra. The main theme of the story is the constant war between the good and the evil.
Indian production house of animated and computer graphical feature films ‘Pentamedia Graphics’ was behind the entire production of ‘Pandavas: The Five Warrior’. The music of the film was composed by Chennai based Indian maestro Ilaiyaraaja. Editors B. Lenin and V.T Vijayan are responsible for the overall vfx part as well. The animation in this film is basic, containing within the movie, its simplicity. Mainly because the movie was released when animation was still new and up and coming.
The team has used basic 3Ds Max software for the modeling of the characters and the elements on screen.The television rights of the film were acquired by Cartoon Network after the release of the film on 23rd December, 2000. The movie bagged the award for the second best animated feature film at the Vancouver Effects and Animation Festival in 2001. It also won the National Film Award for Best feature film in English.