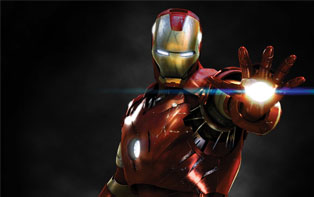 This 2008 American superhero film was based on the Iron Man character from Marvel Comics. It stars a very charming and sarcastic Robert Downey Jr., who plays a playboy and rich genius, Tony Stark. It’s also the first movie set in the Marvel Cinematic universe.
During a demonstration by Stark Industries, the company that he inherited from his Father, Tony Stark is captured and held hostage by terrorists using his own company’s weapons.

In an attempt to earn his freedom from his captives, Stark is forced to build a destructive weapon.

The ingenious inventor builds an electromagnetic device instead to protect his heart and a high- tech armoured suit equipped with guns, flame throwers and a jet pack to help him fly and eventually escapes from his captors.
Stark soon realises that his suit could be an advocate of peace and sets out to make that a reality.
The director made use of giant green screens (Chroma Key) to match the three-dimensional CGI action of the movie with its complex camerawork while filming live action scenes. While filming, Robert Downey Jr. wore only a part of the Iron suit, while the rest was created using CG Animation capturing both motion processes and 3D Animation to make the suit look appropriately heroic and realistic!
The movie also makes use of intense match moving. While the human body is flexible, Iron man’s suit obviously radiated a rigid and tough surface, thus pushing the director to match move his body to make the scenes look authentic.
Flawless photo-realism is the standard set for the films visual effects. The famous iron man suit is a mix of CG Animation and technical wizardry. Every aspect of the movie feels real. The way his suit pops up, shields his face, and the way it ultimately works feels fantastically real and very believable.
Director Jon Favreau keeps the films lighting bright. The special effects are so remarkably crafted that the movie was one that even non- comic book fans could enjoy.

All images are property of Marvel Universe, we are using them to write the review for the same.