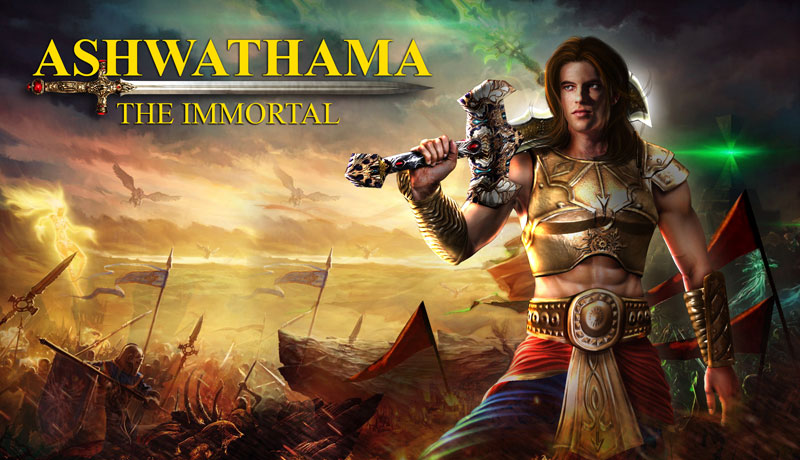 Ashwathama the immortal is set in one the 14 realms of the universe which is beyond our time and logic. It falls under the RPG genre and is a fast paced hard-core game. It a based on Hindu Lore’s and a mix of science and magic to it.

Ashwathama The game is developed by Virtaulinfocom and is a free game to download and play. It is available on play store, apple store, windows and direct to download from amazon for your mobile. This game is a spin-off from the series of Fight of legends and intertwines with storyline.

A brief about the Legend: Ashwathma derives his name from the fact that when he was born he cried like a horse and hence named the same in accordance to the various Vedas, Sanskrit scriptures and Hindu mythology researched by the developers. Ashwathama had humble beginnings as he was born in a very poor family and his family lived hand to mouth. One of the anecdotes from his childhood days was he was very hungry once and wanted to drink milk. Since being poor he could not afford to buy milk, he painted his lips with a mixture of wheat flour with water, making it seem as if he had drank milk. This incident made his father Dronacharya sad and gave him a gem which protects him from hunger, thirst and fatigue to wear on his forehead.

During the battle of Kurukshetra, Ashwathama kills Upapandavas and is thus cursed by Lord Krishna, who took away his gem from him and made to wander earth aimless till the eternity of time.The gem is then handed over to Moon Lord by Krishna for sake-keeping and Ashwathama decides abide by his time by doing meditation. Due to the events of Fight of Legends he now wants to end his suffering and wants to get his gem back to end his curse in the infamous yuga of all 4 yugas – Kaliyuga. The gem has now passed on to Moon Lord’s daughter Chandrama for safe-keeping and protection from Aswathama.

The game kicks off when Ashwathama has now woken up from the shackles of his deep meditation and wants to end.This gameplay is taking place in a different realm from Fight of legends and forms a crucial and a moment defining part in the storyline of both realms.

Fighting Style and Moves: It includes a very easy to manoeuvre control for attacking with two different styles, blocking enemy attacks and charging up your energy meter to unleash an un-dodgeable attack. It involves a console style fighting where the player has to tap buttons to control the character.

Characterization: The game is a 3D animated game which has been designed and developed using real life movie actors and fashion models for mapping each character. The game engine is based on motion capturing for each move of each character.

Graphics: The game uses 3-D realistic graphics and deserve a special mention because of their intricate detailing and lifelike feel. Some of highlights and must mentions are the 3D mapped backgrounds backed with Uber cool music, Intriguing and grasping storyline, Treacherous Villains, Facile and lucid controls. The levels are uniquely designed in various categories like Moon Land, hell, beach, forest, ruins and temples. The player feels realistic about the level he is in because of the architectural structures, waterfalls, trees, volcanos, sand. rivers, rocks and cliffs. 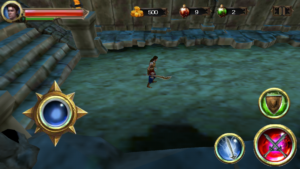 Gameplay: It is a classic RPG game, where Aswathama the champion must face-off against the Moon lady Chandrama and legion of evil worshippers and bidders by her side in his quest. The game is quite fast paced and at a breath-taking speed you are zooming around hordes of enemy and killing them off for re-stashing your gold coin supply .The 1st level beings with a high voltage intro scene and towards to end while battling off Avicis ,this is where you face off your first level boss Zahhak the ruler of hell .In the following levels as the intensity of the game increase you face off against Demi-Gods like Billu the Axe bearer, Dazbog the Superhuman wielding hammer, Guepadro the panther assassin ,Katya the protector of temple and last but certainly not the least Durja the controller of time and restorer of peace.

As Ashwathama progresses towards his unquenching thirst to end his curse he has to redefine himself by deciphering his latent powers and abilities by collecting and forging different orbs. Your character is allowed to power-up by collecting coins from winning each fight and using those coins in the store. The players have to strategically choose what aspect to upgrade for the character from Health and magic stones. With each level progress, the enemies become stronger and the player needs to have a command over his moves and conquer the opponent.

Overall: As Ashwathama battles with his inner demons and travels through the spectrum of time, you get to witness his epic journey through the meticulous narrative and reaching a cliff hanger of an interim leading to Limbo. Look out for this game to satisfy your inner nerd and Sci-Fi enthusiast defying and disturbing the time flow, it will definitely have a lasting impression and leave you gasping for more in this short 8 level quest.

P.S. The developers are already making the concluding levels to this mythological story of an Anti-hero and promise to release it soon across all platforms. 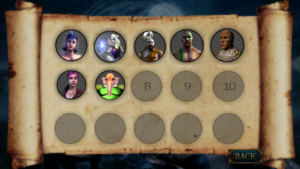