The legend of Prince Rama 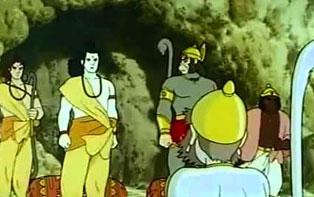 Produced by Japan Nippon Ramayana Co. Ltd, Ramayana- The Story of Ram is an Indo-Japanese animation movie. This movie was directed by Yugo Sako and Ram Mohan, produced by Sako and Krishna Shah and is based on the story of Lord Ram as per the epic Ramayana.

The story revolves around the life of Lord Ram. About how Ram was born and raised in Ayodhya, married Sita and was sent to exile by his father Dashratha. While on exile, Ram is accompanied by his wife Sita and younger brother Laxman. Sita is abducted by Ravana, the king of Lanka and Ram is helped by Hanuman and other monkey army to rescue her. It is the story of victory of good over evil.
Nippon Ramayana Film Co was founded for principal animation of the movie which began in 1990 and had 450 artists who worked on the movie. The animators have brought life to the visuals by blending anime visuals with classical Indian paintings. The final film was made in Japanese, Hindi and English. The animation was produced in Japan and thus, the characters have been drawn in a Japanese style.
Animators chose to focus on battle action and the movie works well for 90s viewers. The drawings in the background are too beautiful and the pastel tones, lighting and composition of every animated cell is quite a work of art. The movie was considered a landmark in Indian Animation, paving the way for only greater things ahead.