Fight Of The Legends

Fight of the legends is a series of 5 games which is your tap and slash game. It falls under the genre of an 3D action game.

The game is developed by Virtaulinfocom and is a free game to download and play. It is available on playstore, apple store, windows and direct to download from amazon for your mobile It is a pure play vengeance saga between the forces of Good Vs Evil. While starting of the game you get to choose the side you want to represent and join forces with.

Storyline: The game takes place in a realm which is ruled by the trinity of OM, Akshya and Brahma and where two races are at war from the beginning of time –the Naga’s and Garuda’s.The leader of Garuda’s Jitantak wants to eradicate the entire Naga race with the help of Akshya since their leader has fallen. The trinity didn’t want to disturb the balance of good and evil and hence refused to aide Jitantak in his quest.

Once while being meditation, Akshya managed to remove all his negative energy in a container which was being overlooked by Mitra. On an occasion while trying to protect Akshya, Mitra opened the container which lead to the creation of Olga umhrah. His single motive was to spread darkness in the world and hence he went and joined Narakasur (Demon lord of 4th Realm) and became King of Naga’s.

Together they plotted many diabolical plans to destroy all humanity. On a particular occasion Narakasur wanted to enter the mortal world and hence he attacked Indra (protector of the mortal world gateway). During the battle, Indra was weakened and was about to lose the battle when the help of his friend KoKo he cast Narakasur into a different dimension at the last minute.

Now the dimensional barrier can be broken only when there is imbalance between the earth’s energy and it tilts towards the dark energy. For this purpose, Narakasur hosted a tournament on earth to know who is the greatest and strongest fighter of all and by doing so to collect dark energy from each fight. This is where the gameplay begins with the player deciding the fate of earth and responsibility to ensure their favourite side wins. 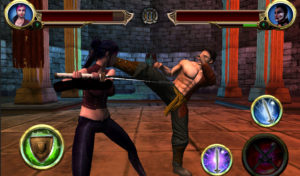 Fighting Style and Moves: You get to choose over 30 plus playable characters. Each of the character has its own unique skill sets and moves. The fighting style has been developed with exhaustive and extensive research and ranges from hand to hand battles, Boxing, karate, Kalaripayattu, martial arts, Thai boxing, Sword Fighting, liberal kunfgu, Taekwondo and many more. It involves a console style fighting where the player has to tap buttons to control the character.

Characterization: The game is a 3D animated game which has been designed and developed using real life movie actors and fashion models for mapping each character. The game engine is based on motion capturing for each move of each character.

Graphics: The game uses 3-D realistic graphics and deserve a special mention because of their intricate detailing and lifelike. The fighting arena just sets the right mood for the combat.

Gameplay: It is a Player Vs Computer game. The first two games in the series FOL 1 n 2 make use of weapons and power-ups to overcome their enemies. It includes a very easy to manoeuvre control for attacking with two different styles, blocking enemy attacks and charging up your energy meter to unleash an un-dodgeable attack. The rest all games in the series doesn’t not allow the characters from either side to use power-ups and uses hand to hand combat ,combing the use of hand and kick attacks. Your character is allowed to power-up by collecting coins from winning each fight and using those coins in the store. The players have to strategically choose what aspect to upgrade for the character from Health, attack or defense attributes. 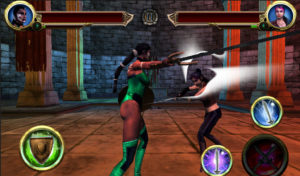 With each level progress, the enemies become stronger and the player needs to have a command over his moves and conquer the opponent.

Overall: This is a fast paced 3D action game with a plethora of fighters with never seen before fighting styles and combos and an intense storyline where you as a player decide the fate of earth. Let the battle begin…