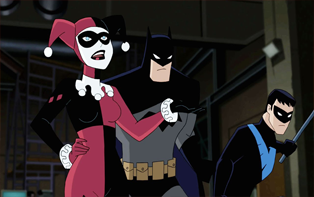 Directed by Sam Liu, Batman and Harley Quinn is an animated movie released this year in August. The film is adapted from the original story, ‘Batman: The Dark Knight returns’ by Bruce Timm. It is produced by Warner Bros. and is the 29th film in the DC Universe animated original series. The movie stars Kevin Conroy as Batman and Melissa Rauch (The Big Bang Theory) as Harley Quinn. Loren Lester is the voice of Nightwing.

Jason Woodrue, also known as, the ‘Floronic Man’, is recruited by Poison Ivy to attempt destroying humanity in order to save the life of the planet. Batman and Nightwing come together to save the species and enlist Ivy’s partner in Crime, Harley Quinn to help defeat Poison Ivy and save the human race. The fate of the world and Batman’s patience is running on Harley Quinn’s unpredictable and untrustworthy nature.
This marks the first time that the Joker’s assistant will be a protagonist in the film, playing a lead role and having the spotlight focus on her. The story line is quite light-hearted and not a full blown comedy, with even Batman joining in for some of the jokes! However, the jokes are of an adult nature making the film not suitable for children.

The film’s animation nails the style of the Batman series and follows the same style. It uses the’ dark deco’ aesthetic, which has come to be popular in the 1990’s Batman animation. There are a few relevant changes, like a sleeker finish to the character profiles and getting rid of Night wing’s mullet. However, Batman and Harley Quinn’s characters have been kept as true to the iconic series as possible.