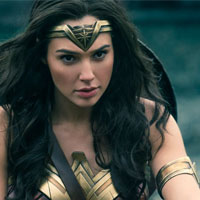 This 2017 American superhero action movie isbased on the DC Comics character Wonder Woman. The movie is the fourth installment of the DC Extended Universeand features Gal Gadot as the main character.

The movie is set in 1918, in an island named ‘Amazon of Themyscira’ where Princess Diana (Gal Gadot) lives. American pilot Steve Trevor (Chris Pine) crashes offshore on the island and is rescued by Princess Diana. Trevor then tells Diana about the ongoing World War. In order to end the conflict and the war, Princess Diana leaves her home and becomes Wonder Woman in due course.
Digi-doubles and face replacements were used to enhance the action sequences. The production team built a trench and a part of the No Man’s Land on the backlot of the Warner Bros. studios. The action was profoundly previsualized by Proof, and shot on 35mm film, which contained both extreme and semi-slow motion. The first use of Digi-double takes place when Wonder Woman leaps over the machine-gun fire into the trench, which is in fact a take-over from live-action to CG.
The special effects team also built a “shield shaker” with the purpose of helping Wonder Woman’s shield visually absorb the full impact of gun fire. Sparks and debris were later computer generated.
Almost all the action sequences included stunt doubles with wire pulls and face replacements with Gal Gadot. The final shot of the trench fight scene where Wonder Woman leaps out the window, was completely digital.